Welcome! This is the home base for Paul Lesinski's musical endeavors. Thanks for visiting. Pop open a cold one, put your feet up, make yourself at home and enjoy!

I am excited to announce my Pink Floyd tribute band Floydian Slips will return to the stage for the first time since New Year’s 2019. We will be playing Portland and Eugene Oregon on January 7 and 8, 2022, doing the Dark Side of the Moon and Animals albums in their entirety along with select favorites. To get tickets, go to these links. The full press is release is below the poster art! 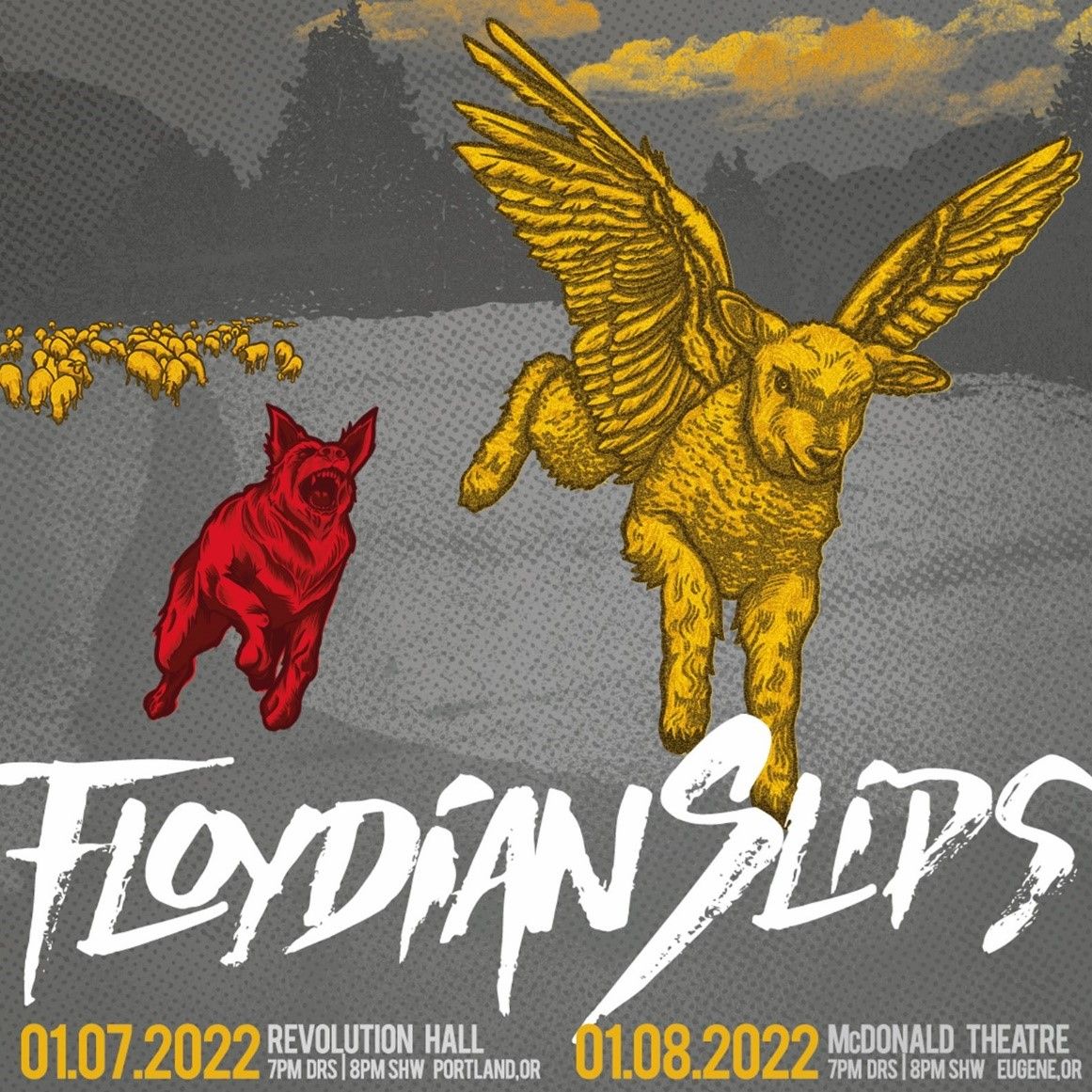 Portland, Ore. – October 15, 2021 – The northwest musical collective Floydian Slips will perform Pink Floyd songs, including two full albums, in all ages show at Revolution Hall Friday, January 7, 2022, at 8 p.m. (7 p.m. doors). The band will perform Pink Floyd’s seminal Dark Side of the Moon and Animals albums in their entirety. Minors are welcome with a parent or guardian.

Floydian Slips co-founder Paul Lesinski said, “We live in strange times and the individual has great power. Through social media, one person can start a movement. To quote a line from Animals, people are breaking away from the pack. They are taking a stand and using social platforms to share and amplify it. But when misused, this power causes great chaos and can be used to manipulate. In this context, the madness, money, and power presented in Dark Side and especially Animals is very relevant today.”

After more than 23 years of rare and singular performances, the Pacific Northwest musical collective known as Floydian Slips continues to tear through the discography of classic Pink Floyd, performing note-perfect renditions of many of the iconic hits and deep cuts composed by the British-rock band.

Each Floydian Slips concert is different, with unique set lists and special effects, and the band moves from “greatest hits” tributes to full-length album performances depending on its collective mood.

“Getting this group together to perform is a blast,” said founding member Brendan Relaford. “Since we don’t tour, and all the members of the Slips have other bands and careers in and out of the music business, when we gather to play this timeless music, it’s a joyous occasion and that vibe is passed to our audience.”

Born from a one-off idea to play through Pink Floyd’s classic The Dark Side Of The Moon album during a single concert in 1997, the eight-piece band has grown into a musical ensemble on a 24-year run that captures the essence of Pink Floyd, with emphatic tone placed just right where it belongs in each song.

The band approaches the classic music with all the curmudgeon, stoniness, swagger and attitude of the men who wrote the songs, and never fails to impress the naysayers while delivering the specific notes in the right places to please any Pink Floyd fanatic.

Having performed The Dark Side Of The Moon, Animals and The Wall in their entirety many times, set lists have included most of the Wish You Were Here album, as well as select material from A Saucerful of Secrets, Meddle, and A Momentary Lapse of Reason, all played with great care to reproduce the original sounds and emotions of The Floyd as closely as possible.

I played a virtual acoustic gig recently with Northwest Talent Spotlight (see the whole thing here). I told the story of how the 2020 pandemic shite show really started for me when Neil Peart passed away that January. So it was fitting to learn and perform what turned out to be the last song on the last album for Rush. Called 'The Garden,' it fittingly addresses life and gained experience, and what is really important. See what you think: 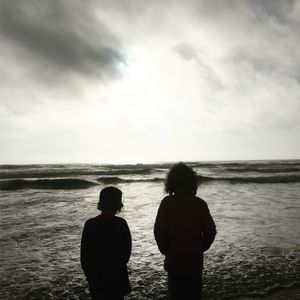 Huge Thanks to NW Talent Spotlight

We had so much fun playing last Thursday at the Northwest Talent Spotlight studios. The band was on, and we had all cylinders firing on the lights, sound and web front as well. Some of our best playing IMO and we caught it all on tape - lightning in a bottle! Thanks to Bobby Palotta and Andy Madson for treating us right. Enjoy the whole show HERE!

We had so much fun doing the PDX Couch Tour show last month that we found another place to try. This is a live three-piece trio gig done with Northwest Talent Spotlight, a crew that is familiar with TV studio production. Showtime is 7 p.m. PT on Thursday October 1. You’ll be able to watch via Facebook or YouTube. We’ll play about an hour and a half. Hope you can join! Links below!

I’m excited to officially announce an electric trio gig, which will be live streamed live this Thursday (Sept 3) at 8 p.m. PT. We are doing it in partnership with PDX Couch Tour at the Star Theater in Portland. PDX Couch has strict COVID protocol and has done more than 100 live stream concerts with no issues, which is why we agreed to do the show. Dave, Mike and I are very excited to play live and LOUD again and to debut three of the new songs from the CD. You’ll be able to watch live on Facebook, YouTube and there is a Zoom link too, so engaging with the band is possible and encouraged.

New Video - Say What You Will

Posting a new video from the new CD. This song, called Say What You Will, is the most political song I have ever written. It simply asks the question, "are you happy with how you voted in 2016?" The song is, of course, from the new CD called What You Hold Near, which you can find on the music section of this page and iTunes/Apple Music, Spotify and Amazon.

Videos in One Place

Hey everyone - Reverb Nation has a cool way for me to share all my recent videos. Check it out below!

Announcing New CD - What You Hold Near!

I am pleased to announce the official release of my third full-length CD, a work which I am calling “What You Hold Near.” You can get it right now at my Bandcamp page, and you can purchase or stream it from iTunes/Apple Music, Spotify and Amazon. There are YouTube promotional videos for three of the songs here, here and here.

So…let’s face it -- we are living through unsettling times. And even though these songs were written and recorded over the past two years, I think they resonate with what is happening today in the world. I chose to call the album What You Hold Near because at the core of things, we draw strength from our families, friends and those people and things we choose to hold nearest to our hearts.

In difficult times, music has always powered me through. I hope it is not too presumptuous to suggest that these songs can offer opportunities to escape, reflect or to just rock out to.

Thanks to my bandmates David Kendall and Mike Budd, who brought these songs to life. Thanks to those who I hold near, especially my beautiful wife and children. May we all emerge on the other side stronger and wiser.

As always, thank you for your support. Stay safe!

This week I posted the video for the lead song from my next CD. The song, called Forgotten Be Found, was written last year in reaction to things going on in the U.S. (and frankly the rest of the world too). The media echo chamber; the notion of being forgotten and then having a chance to undo that through action; the choices we make every day to lean into what we care about most. The CD embodies all of this and I am excited to unveil it soon. In the meantime, enjoy the below. So far I've been getting good feedback. Thanks! 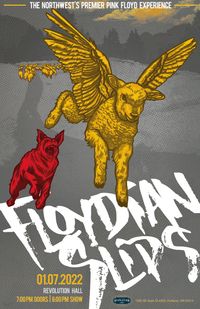 The northwest musical collective Floydian Slips will perform Pink Floyd songs, including two full albums, in all ages show at Revolution Hall Friday, January 7, 2022, at 8 p.m. (7 p.m. doors). The band will perform Pink Floyd’s seminal Dark Side of the Moon and Animals albums in their entirety. Minors are welcome with a parent or guardian.

$22 advance and day of show; show is all-ages 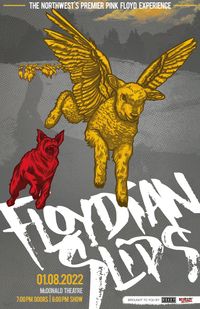 The northwest musical collective Floydian Slips will perform Pink Floyd songs, including two full albums, in all ages show at McDonald Theater, January 8, 2022, at 8 p.m. (7 p.m. doors). The band will perform Pink Floyd’s seminal Dark Side of the Moon and Animals albums in their entirety. Minors are welcome with a parent or guardian.